Susie Moloney: A dry spell – A dying town, a desperate woman, then comes the rainmaker …

Karen Grange came to Goodlands, North Dakota, to start her life over. Instead, she watches a once-thriving town die before her eyes. Four years without rain has struck Goodlands like a curse, withering crops and darkening the air with dust. In its wake, a sudden wave of strange, twisted crimes has shattered families and lives. Desperate, Karen reaches out to the only man who can help–a man who offers a miracle. . .and promises to heal her wounded heart. His name is Tom Keatley. A drifter, an outsider like Karen, Tom is a rainmaker, the stuff of myth. But to Karen, he is her last hope. Now, as Tom struggles to pull rain from the sky, something unexpected happens that changes both of their lives forever. For beneath the hard, cracked earth, a shattering secret is about to explode–a secret whose chilling repercussions will challenge a man’s courage, a woman’s desire. . .and the soul of an angry, embittered town. 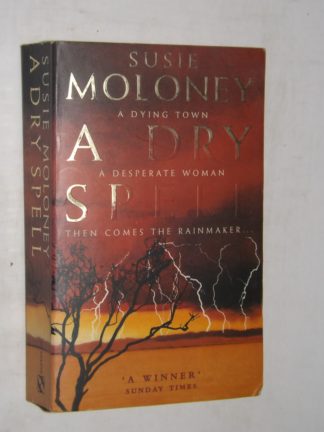