Sam Loyd (1841–1911) was America’s greatest originator of puzzles. For more than 50 years, his ingenious posers, appearing in innumerable newspaper and magazine articles, stumped and delighted an American public running into the millions. (Four or five of his mechanical puzzles became national crazes.) After Loyd’s death, his son issued a vast collection of these problems in a book entitled “Cyclopedia of Puzzles” — probably the most famous and exciting collection of puzzles ever assembled in one volume. Now Martin Gardner, a well-known author of many science and puzzle books and articles, has selected the choicest mathematical puzzles contained in the long out-of-print “Cyclopedia,” editing each one for accuracy and clarity, but in such a way as not to sacrifice the unique style and historical flavor of the originals. This is the second volume of Gardner’s selection to appear, and contains 166 of Loyd’s most brilliant and original creations, together with the 150 line drawings and diagrams with which they were originally illustrated. A distinctive feature of this new selection is the analytical table of contents, which groups the puzzles according to the type of mathematical skill necessary to solve them. Whatever your taste in mathematical puzzles, you will be able to locate easily puzzles based on arithmetic and algebra; speed and distance problems; game theory; operations research; clock problems; plane geometry; geometrical dissection; route tracing and topological problems; counter and sliding block problems; sold geometry; and physics and calculus problems. 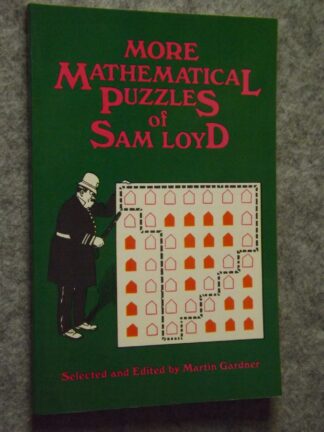