This first of the classic two-volume survey of Handel’s operas was first published in 1987 and reissued in a revised paperback edition in 1995. Now it is brought back into print in a year which has seen numerous productions and recordings of the operas and which marks the 250th anniversary of Handel’s death. Their revival in the modern theatre – not a single opera was staged or performed anywhere between 1754 and 1920 – has been among the most remarkable phenomena in the history of the art, and is due in no small measure to the painstaking research of Dean and Knapp in volume one, and Dean himself in volume two, published by Boydell in 2006. This first volume devotes a chapter to each of Handel’s first seventeen operas, offering a full synopsis and study of the libretto, extensive discussions of the music, a performance history, and a comparison of the different versions of the opera. In addition there are several general chapters on the historical and stylistic context of Handel’s operatic career to 1726, and a number of Appendices including a list of performances during Handel’s life and the location of librettos, Handel’s borrowings, Handel’s singers, and modern stage productions up to the end of 1993. 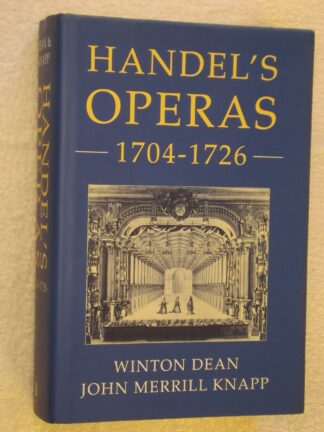