Hannah Holmes, A mesmerizing expedition around our dusty world. Some see dust as dull and useless stuff. But in the hands of author Hannah Holmes, it becomes a dazzling and mysterious force; Dust, we discover, built the planet we walk upon. And it tinkers with the weather and spices the air we breathe. Billions of tons of it rise annually into the air–the dust of deserts and forgotten kings mixing with volcanic ash, sea salt, leaf fragments, scales from butterfly wings, shreds of T-shirts, and fireplace soot. Eventually, though, all this dust must settle. The story of restless dust begins among exploding stars, then treks through the dinosaur beds of the Gobi Desert, drills into Antarctic glaciers, filters living dusts from the wind, and probes the dark underbelly of the living-room couch. Along the way, Holmes introduces a delightful cast of characters–the scientists who study dust. Some investigate its dark side: how it killed off dinosaurs and how its industrial descendents are killing us today. Others sample the shower of Saharan dust that nourishes Caribbean jungles, or venture into the microscopic jungle of the bedroom carpet. Like The Secret Life of Dust, however, all of them unveil the mayhem and magic wrought by little things. Hannah Holmes (Portland, ME) is a science and natural history writer for the Discovery Channel Online. Her freelance work has been widely published, appearing in the Los Angeles Times Magazine, the New York Times Magazine, Outside, Sierra, National Geographic Traveler, and Escape. Her broadcast work has been featured on Living on Earth and the Discovery Channel Online’s Science Live. 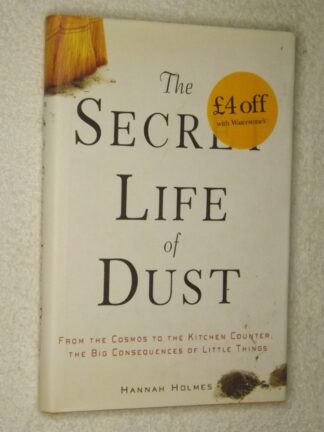