Christopher Andrew: The defence of the realm – The authorized history of MI5

MI5, the British Security Service, was not even acknowledged until 1989, and has now reached the century mark with a massive, authorized biography. This truly compendious volume, commissioned by MI5, was compiled by the acclaimed intelligence writer and historian, Christopher Andrew. This is a history of the one hundred years beginning with the founding of MI5 in 1909 in response to the Edwardian spy mania, changing from a focus on counter-espionage and counter-subversion to one of counter-terrorism. It remains perhaps the most famous and effective clandestine agency in the world. The role of MI5 has changed over the century: while maintaining secrecy in order to effectively protect parliamentary democracy, it has been under increasing pressure to be as transparent as possible. Mr. Andrew, professor of modern history at Cambridge University, was chosen to delve into the secret history of MI5 and given unrestricted access to the 400,000 internal files of the service. No doubt, Mr. Andrew opened himself to criticism in that he has asked his readers to accept his analysis upon faith. Since the rest of us cannot independently verify his conclusions , we must put our trust in his integrity. Sometime in the future, other researchers may be given access to the files, and this has surely given pause to Mr. Andrew to accurately record his findings. The result is a wonderfully detailed look at the critical issues confronting the Security Service from the time of British imperialism, through the “Red Scare” and “Boche” period of pre- and post-WWI, the Second World War, the Cold War, the exposure of the Soviet infiltration of both MI5 and MI6, and up to the terrorism threats of the turn of the present century. Beginning with the card index of suspicious persons (over 200,000 names in 1917), the concerns of MI5 have been widespread; the 1920s and 30s were concerned with the threat of international communism; WWII brought fears of fascism in Europe and Asia. The Cold War ushered in Soviet skullduggery and the need to combat al-Quaida after 9/11. The thousand-plus pages of this book are brimming with details of the achievements—and failures of MI5. Was counter-intelligence specialist Peter Wright correct about infiltration of the services beyond that of the Cambridge Five? Was P.M. Harold Wilson correct in his belief that MI5 was surveiling him? Jews were prohibited from serving in MI5 until the late 1970s because of their perceived double loyalty to Britain and Israel. MI5 chief Guy Liddell testified before the Joint Intelligence Committee in 1949, stating that “n_____ coming here often went to the C[ommunist] P[arty]” and that “West African natives are wholly unfitted for self-rule.” MI5 conducted secret surveillance of the colonial delegations coming to London for post-WWII independence discussions. It must be admitted that the transition of power from the British Empire to independent states in Africa and Asia came off much more smoothly than the same transitions by the rest of the European countries. The notable achievements of the Security Service include the Double-Cross System of WWII; the complete list of successes is limited by the need to maintain secrecy, a problem of all clandestine agencies; the measure of their success is judged by the things that do not happen. Defend the Realm is not a flawless book. In any security service, it is difficult—perhaps impossible—to separate fact from fiction. With its eccentric mix of professional soldiers, amateur spies, and false identities, it is to Mr. Andrew’s credit that he has achieved so much. Mr. Andrew is an historian of high repute. His studies of Soviet intelligence in collaboration with two defectors and ex-KGB officers, Oleg Gordievsky and Vasili Mitrokhin, are monumental. His books include KGB: The Inside Story (1990), The Sword and the Shield: The Mitrokhin Archive and the Secret History of the KGB (1999), and The Word Was Going Our Way: The KGB and the Battle for the Third World (2005). As for criticism that his appointment as official historian for MI5 (he was too close to the Security Service to be impartial), his response as quoted in The Guardian was, “Posterity and postgraduates are breathing down my neck. I tell my PhD students: I know you can only get on in the profession by assaulting teachers. You are not going to make a reputation by saying, ‘Look, Professor Andrew was right all along the line.’” As MI5’s files are eventually opened to other researchers (as they will no doubt be), Mr. Andrew’s work will be scrutinized. Any “white-washing” would be exposed and his work undermined. Defend the Realm is a most valuable and comprehensive contribution to the understanding of the British Security Service and, by extension, the twentieth century. In the world of smoke and mirrors, truths and lies, this is the one book that intelligence professionals need to read. 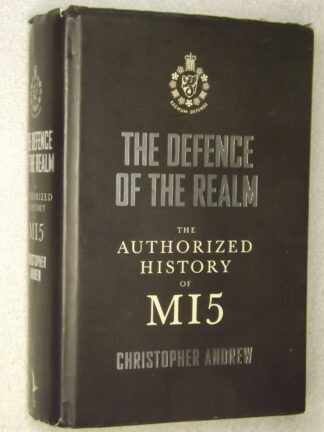 Du ser på: Christopher Andrew: The defence of the realm – The authorized history of MI5 40,00 DKK
Tilføj til kurv